Been busy with classes this quarter- as usual i gave in to the allure of really cool sounding classes as well as the carrot and stick diploma thing…
but srsly- check out this schedule:

Sex – no its not offered through Exercise and Sports Studies ; actually a relatively easy sociology class that will count towards GE reqs. Im currently writing this instead of studying for the midterm that’s 32 minutes away.
Data Structures and Algorithms – a class that makes you think ‘damn that was clever’
Compilers – a class that makes you think ‘damn that was REALLY clever’
Ethics for Engineers– how to lie to your self in the mirror
Digital Control Design – a crazy amount of work for an upper division elective , but really worth it. The teacher [zomg] seems to actually care about her students learning and being interested in controls! I feel a lot of the loose ends from last quarter rapidly coming together.
.xxx =( dropped this one…

[wow wordrpress you suck at del, strike, and s tags]
So there’s my excuse for going a month+ between posts. Worse still, it means the fun non-curricular stuff now has to be saved for weekends…
Anyway here is the current run-down on the progress of these weekend amusements:

The FBVisual project has been kind of set aside for the moment, I made a few more screens (pictured below) which I don’t really consider to be 100% complete – but they are kind of neat as proof of concept, and at some point I would like to get them more polished.

What up: a cloud map in a word bubble. Larger words are words that appear more frequently, smaller words are less frequent. The left bubble was derived from a scan of all my friends current ‘status’ on facebook, while the one on the right it taken from the ‘about me’ section. Of course, I also do some filtering to get rid of words that are very common and not so interesting (prepositions and such) to make the good stuff pop out. Shows some interesting trends, especially around holidays or big events. Things like ‘snow’ ‘christmas’ ‘family’ and ‘new year’ emerged pretty strongly when i ran it a few months ago – wish i thought to run it on valentines day , I would have expected to see some lovey-dovey stuff come out. 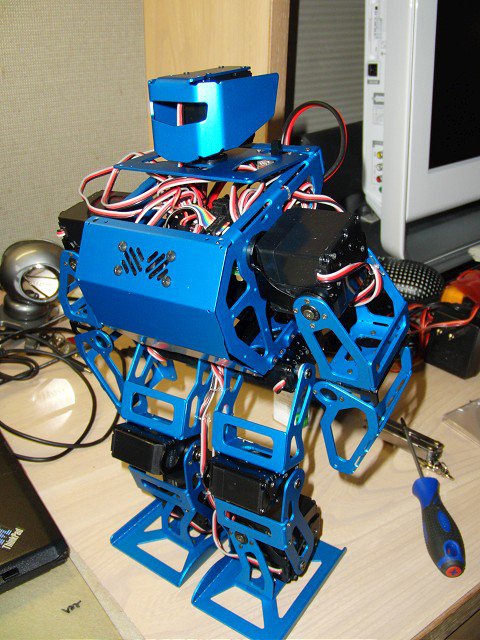 She started out as an RB2000 kit I picked up during my travels East and will now in the process of being outfitted with some additional additional smarts and weaponry for that mech-warfare challenge.
When I heard about the challenge, it really caught my imagination and I thought it was just wayy to cool to pass up – the rules (in short) are as follows:
-No looking at the battle arena, except through a wireless camera mounted on the bot
-Robot must walk on legs
-Destroy all other robots!
(ok, in actuality they are a little more in depth, but you get the idea)
and this coming year , if all goes according to plan, they will be adding a ‘hardcore’ class which promotes the use of CO2 pistols, Flamethrowers, and Micro Rockets .
High tech + red neck = my kind of sport.
I bet you can guess which class I’ll be trying to enter =D
Major modifications to the RB2000 thus far:
New Skull – surgically inserted my nifty custom machined mounting bracket, wireless wide angle camera, zigbee mount, and red LED in the eye for good measure 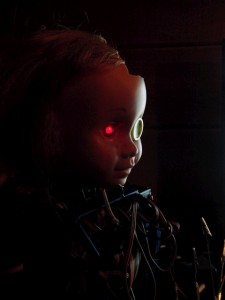 Laser mounted and attached to arm – hopefully this will be sufficient feedback to let a remote machine know what the arm is pointed at through the computer vision loop. I have it tested and working with a fair amount of reliability, but it could definitely be improved.
New battery connectors!– ok maybe not so exciting – but will allow me to connect up my new 3Ah lithium polymer batteries alone, or 2 in parallel. Only thing that’s kinda a shame (for the efficiency junkie in me) is that the batteries are 7.2v and the board just uses a 5v linear regulator- which is like a 30% loss! There will still be plenty of juice, but if im feeling like a badass I may try to include a switching regulator stage at some point.

Zigbee board– purdy aint it? 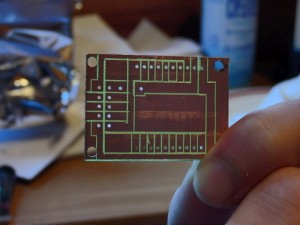 The lovely thing was that when i finally got all the parts I needed to test it, I managed to kill the main servo driver board by (I think) shorting the 3.3v src to gnd with the dmm..
I wont repeat all the expletives uttered here, but suffice to say I was pretty unhappy.. Its looking like a replacement will run somewhere between $200 and $390 which and there would be a 2-3 week lead time to get the part from Japan. painful.

before I totally give up on repairing the thing, Im going to try just swapping out the 3.3v smc regulator with the hope that that’s all that got fried, but who knows…
wish me luck!