As I am now back in SoCal I’ve been doing a lot of thinking about how I’m going to eventually upgrade my motorcycle. What it needs most desperately is a lithium battery pack, charger, and BMS. First step is to get up to speed on whats available; this is what I came up with in my first bout of research. Also , because i have a fetish for visualization, i whipped up a quick sketch to create a series of “DDR Difficulty” graphs based on the 5 most relevant of these metrics: Specific Energy, Energy Density, Cost per Watt Hour, Continuous and Peak Discharge rates. 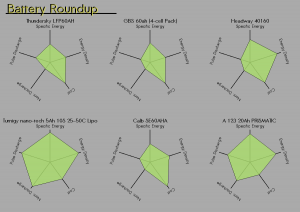 You can download the source here. To use it you will need Processing. Download the spreadhseet (linked above) as a CSV, make sure it is named battData.csv and is located in the data folder. There is a “Compare in vis” column in which you select 6 batteries to compare. If you want [to be awesome and] contribute to the list of batteries request edit priviledges on the google doc and i’ll approve you.

I could still improve the visual, as there are two things are potentially misleading.
1) every manafacturer seems to want to rate their batterie’s Ah capacity at different discharge rate. ie one 60Ah battery may fall to 40Ah when discharged at 1c, while another may only fall to 55. As 1c is closer to reality in an EV application. I’m considering editing the table to use approximated 1c capacities, as opposed to the advertised number. Such guestimations i think would still be more accurate than strictly following the advertised numbers.
2) As the batteries are directly contrasted with one another a value may seem low, while in reality it is quite adequate. For example Headway cells seem to have a rather low constant current and pulse discharge rate, however 5c/10c is plenty for most applications. At 5c the entire pack is drained in 12 minutes! this only seems low because there are also much higher discharge rate discharge batteries available.

Conclusion: Turnigy Lipos pretty much clean up. I’ve also heard good things about Hyperion, though I have yet to find a supplier; so they are not in the spreadsheet. Very impressed with whats available now, compared to when i first did the conversion in ’09. I just need to figure out how to keep those RC batteries well balanced and make sure they don’t explode. you know, the details xD